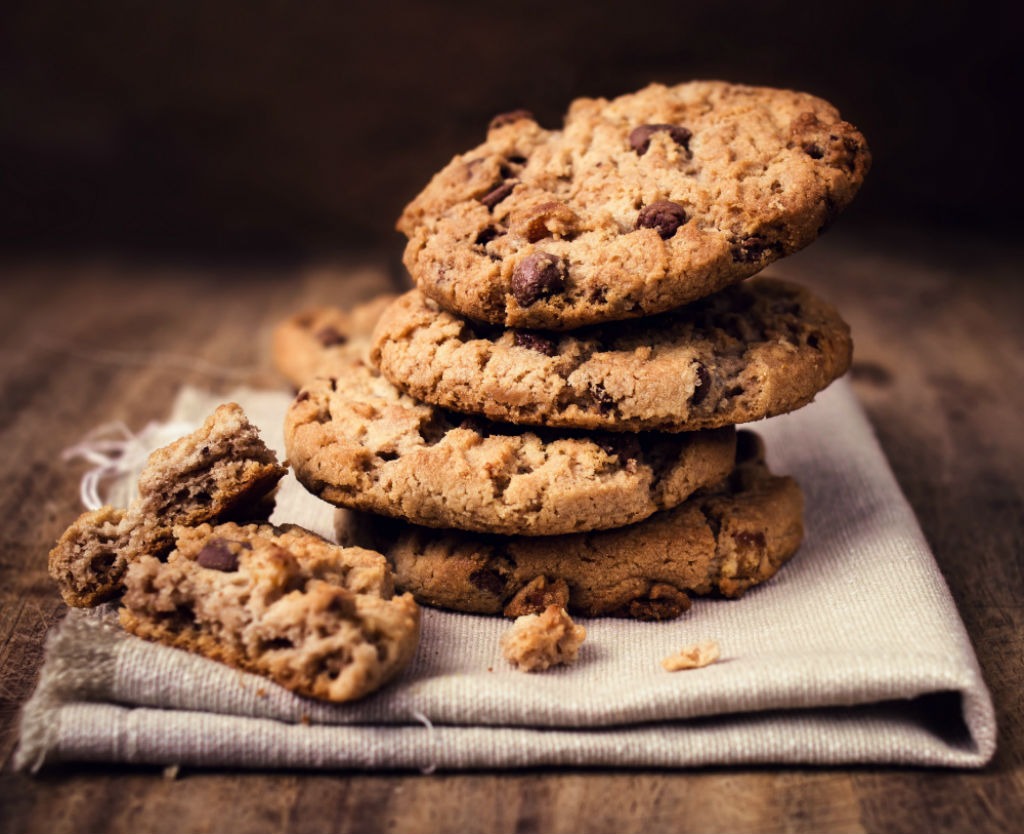 If you’ve become thicker around the middle since turning 30, it may be a sign that your liver isn’t functioning optimally. Avoiding toxins like artificial sweeteners will help the vital organ work more efficiently, and in turn, slim your middle. To jump-start the detox process, kick foods make with fake sweeteners (like sugar-free gum, candies, and snacks) to the curb. And for more ways to slim your middle, check out these 20 Weight Loss Tricks You Haven’t Tried. 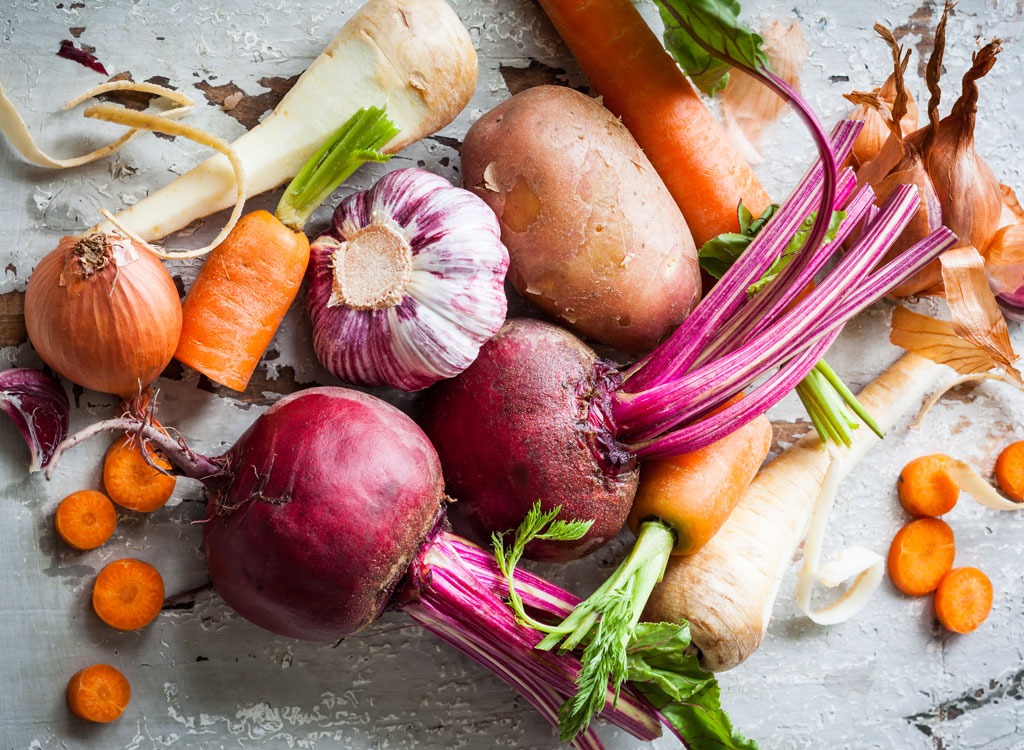 Reaching 30 means that you’ve had three decades to accumulate toxins from food, which can negatively affect metabolism and hormone balance, explains Smith. Researchers have also found that men who consume the most pesticides through produce have far fewer motile sperm than guys who’ve eaten the least—not good news if you’re trying to start or expand your family. The most popular produce that has the highest amounts of pesticides and should be organic whenever possible include: apples, strawberries, grapes, celery, peaches, spinach, bell peppers, cucumbers and cherry tomatoes. To discover more things that may be slowing down your calorie burn, check out these 25 Things You’re Doing to Slow Your Metabolism. 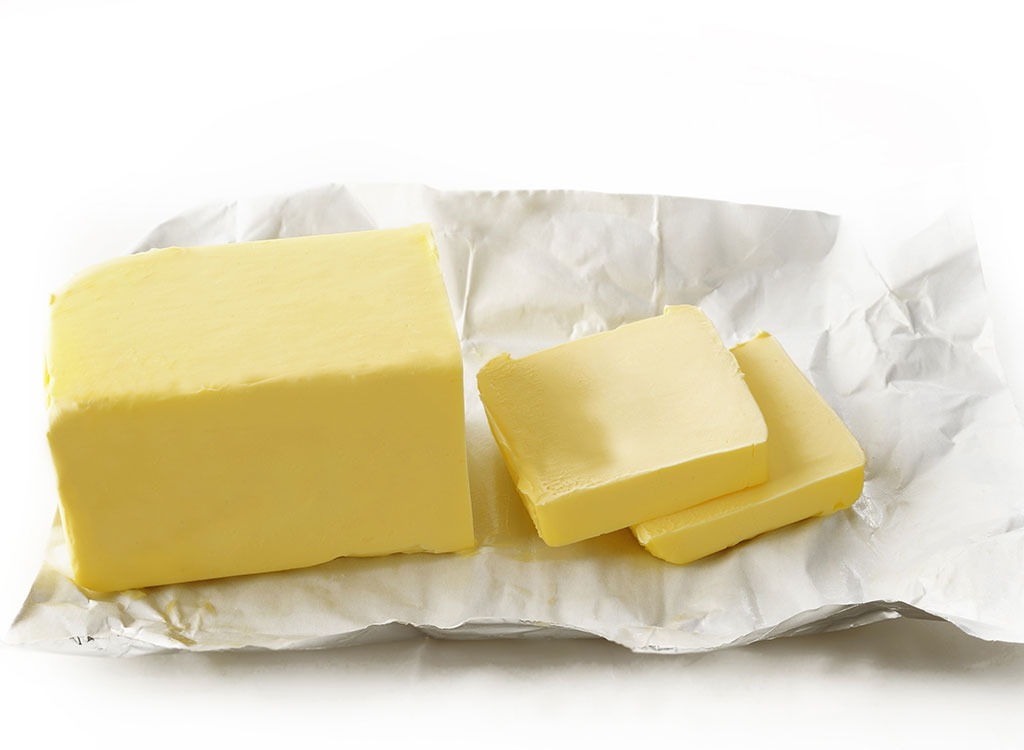 Butter alternatives like margarine are often made with partially-hydrogenated oils, one of the most common trans-fats. You may have heard that this type of fat is linked to heart disease, but what most people don’t know is that it may also accelerate the skin’s aging process by making the skin more vulnerable to ultraviolet radiation. When the skin gets damaged by the sun, it breaks down the skin’s elastin and collagen. But that’s not all, studies have also found that eating margarine can cause chronic inflammation, which may also accelerate wrinkle formation. Yikes! To learn about more scary supermarket foods, check out these 150 Worst Packaged Foods in America. 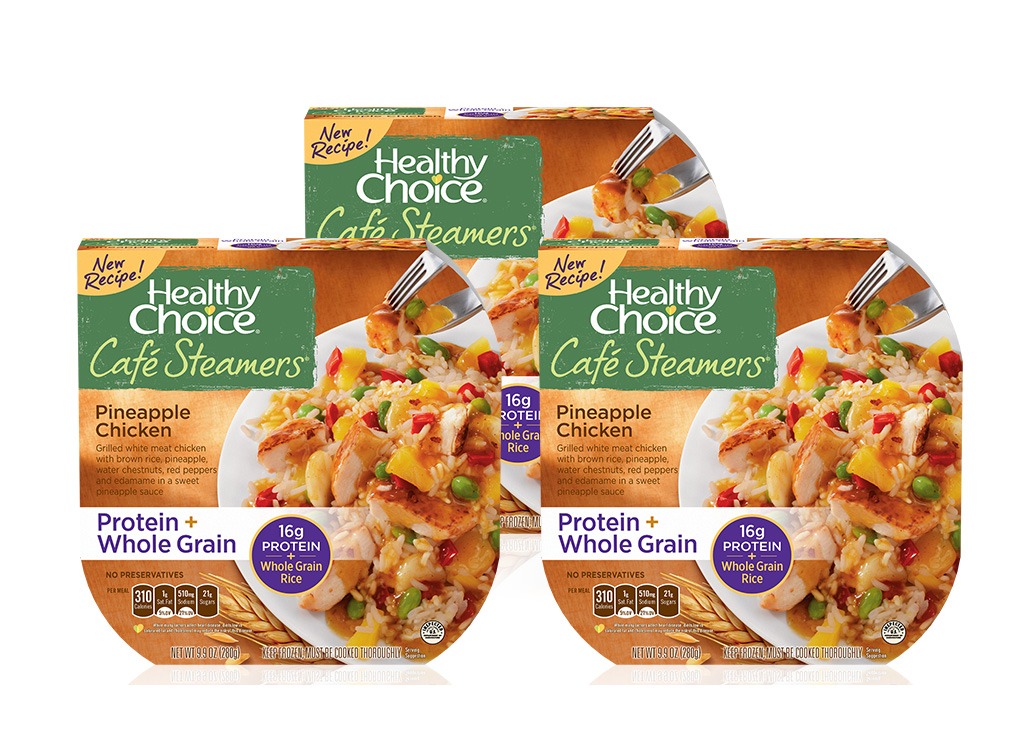 “When you were younger, you may have been able to starve yourself to drop a quick ten pounds before bikini season, but this is almost impossible once the age ‘odometer’ turns to 30. Not to mention, it’s really unhealthy, ” warns Chicago-area registered dietitian Christine M. Palumbo. Skip the unappetizing microwave diet meals—they tend to lack satiating nutrients like fiber and pack excess salt, sugar (this meal has almost an entire day’s worth of the stuff) and chemical additives your body simply doesn’t need. Instead, lose weight with the help of these 29 Best-Ever Proteins for Weight Loss. 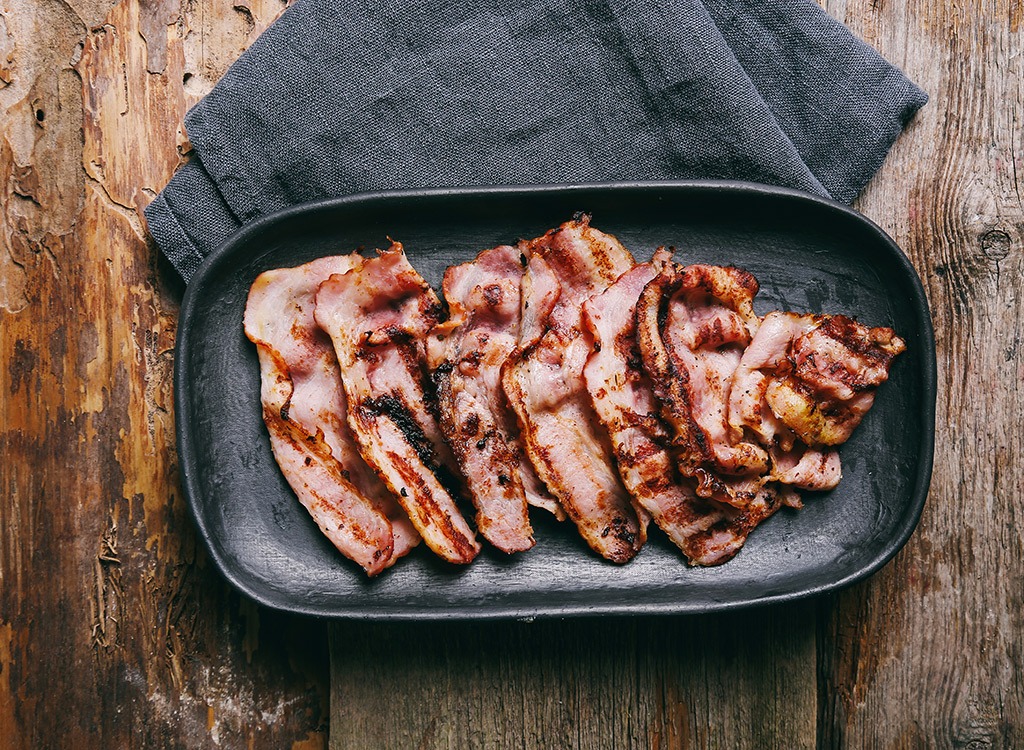 Bad news, bacon lovers: This beloved breakfast food may make your skin start to sag well before your AARP card arrives. The reason: Sixty-eight percent of bacon’s calories come from fat, with almost half of that being the saturated variety. Besides contributing to weight gain and increasing the risk of heart disease and stroke, saturated fats can cause inflammation that accelerates skin aging. Bacon and other processed meats also contain sodium nitrate which, according to a 2013 study published in the journal European Cytokine Network, enhances oxidative stress. Oxidative stress can cause structural changes in collagen and elastin (the proteins that keep skin looking young), resulting in premature wrinkles, explains St. Petersburg Institute of Bioregulation and Gerontology researchers. Luckily, you don’t have to give up bacon altogether to keep your skin smooth. Just switch to a nitrate-free variety with less than 2 grams of fat and no more than 1 gram of artery-clogging saturated fat (like Applegate Natural Good Morning Bacon) and cut yourself off after two slices. Or, better yet, make one of these 50 Best Overnight Oats Recipes instead. 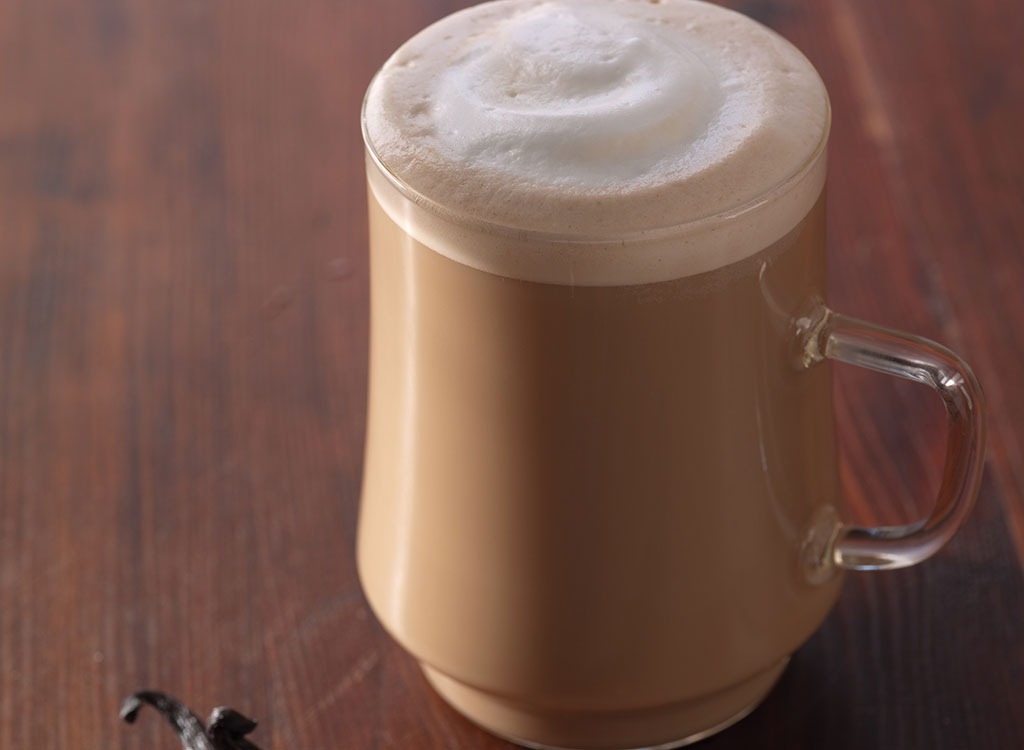 When it comes to drinks laced with artificial sweeteners, just say no! Researchers say these Frankenfoods confuse our bodies by making us expect calories that aren’t there which interferes with our body’s ability to regulate what we eat. The result is what they call “metabolic derangements” like poor insulin response and elevated glucose levels, which can lead to fat storage and a host of illnesses like metabolic syndrome, type 2 diabetes, and cardiovascular disease. “If drinks with artificial sweeteners are a staple of your diet, it’s best to kick the habit to maintain health and prevent diseases throughout the aging process,” says Moskovitz. 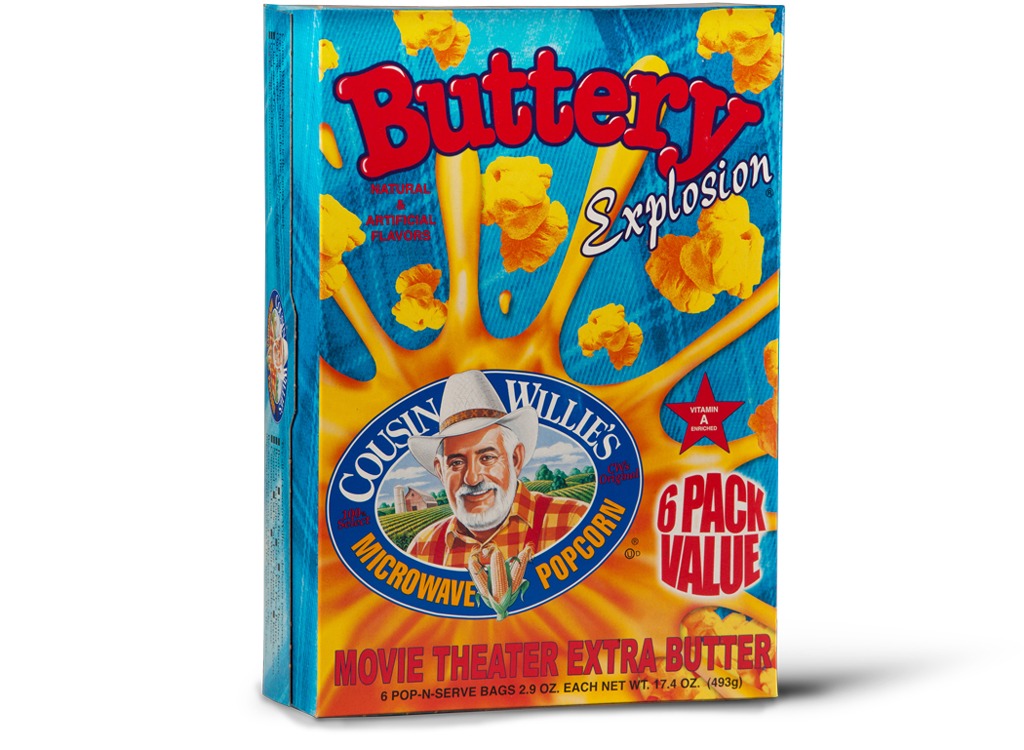 In it’s purest form, popcorn is a healthy snack filled with energizing whole grains. But like many things, the food industry has managed transformed something wholesome into something harmful to our health. Cousin Willie’s Butter Popcorn, for example, has three grams of artery-clogging trans fat per bag. That’s particularly alarming since the FDA has required trans fats to be removed from foods by 2018. “Trans Fats are particularly important to avoid as people get older because the risk for heart disease increases with age,” explains Smith. For a healthier snack, pop plain ol’ kernels on the stove with some coconut oil—one of the 8 Best Fats for Fat Loss and a small pinch of salt. 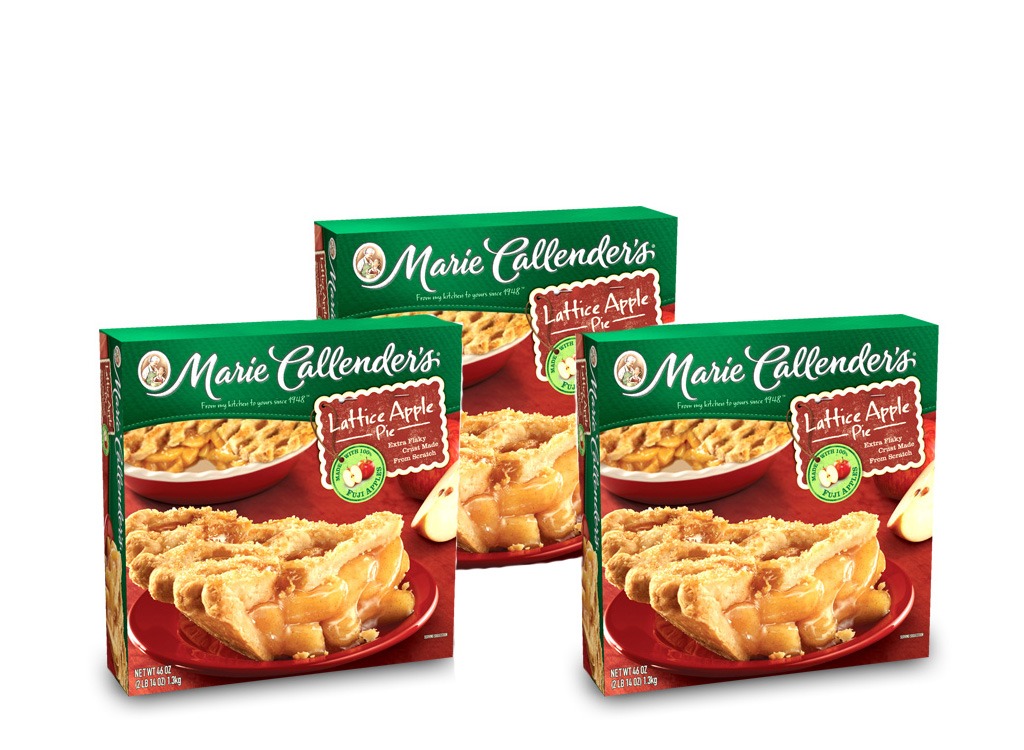 Marie Callender’s not-so-wholesome apple pie is another food packed with dangerous hydrogenated oils. One slice of the stuff packs a whopping three grams—or a day a half worth—of trans fats. Not only are trans-fats bad for your ticker, according to a Fertility and Sterility study, they can also lower sperm counts, which is bad news if you’re trying to make a baby. 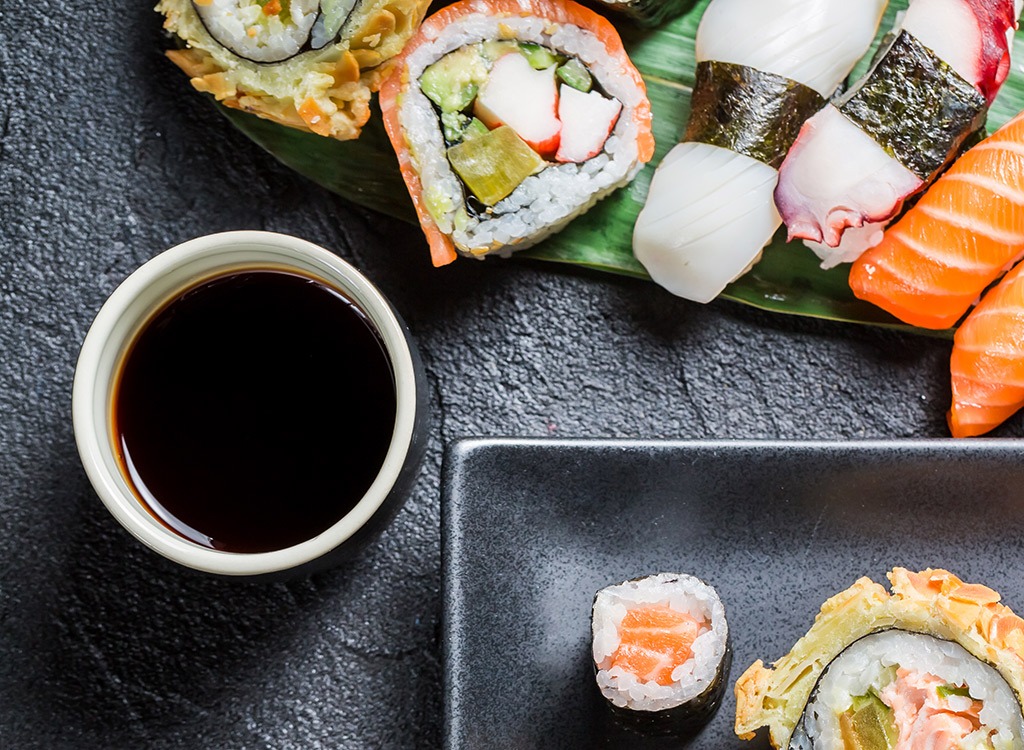 Puffy, dark circles under the eyes tend to become more pronounced with each passing birthday—and being dehydrated makes matters even worse. To wake up looking refreshed, steer clear of moisture-sucking salty foods like soy sauce (a mere tablespoon of the stuff has a whopping 879 milligrams of sodium) and drink plenty of water. Sick of basic H20? Whip up one of these 50 Best Detox Waters for Fat Burning and Weight Loss. 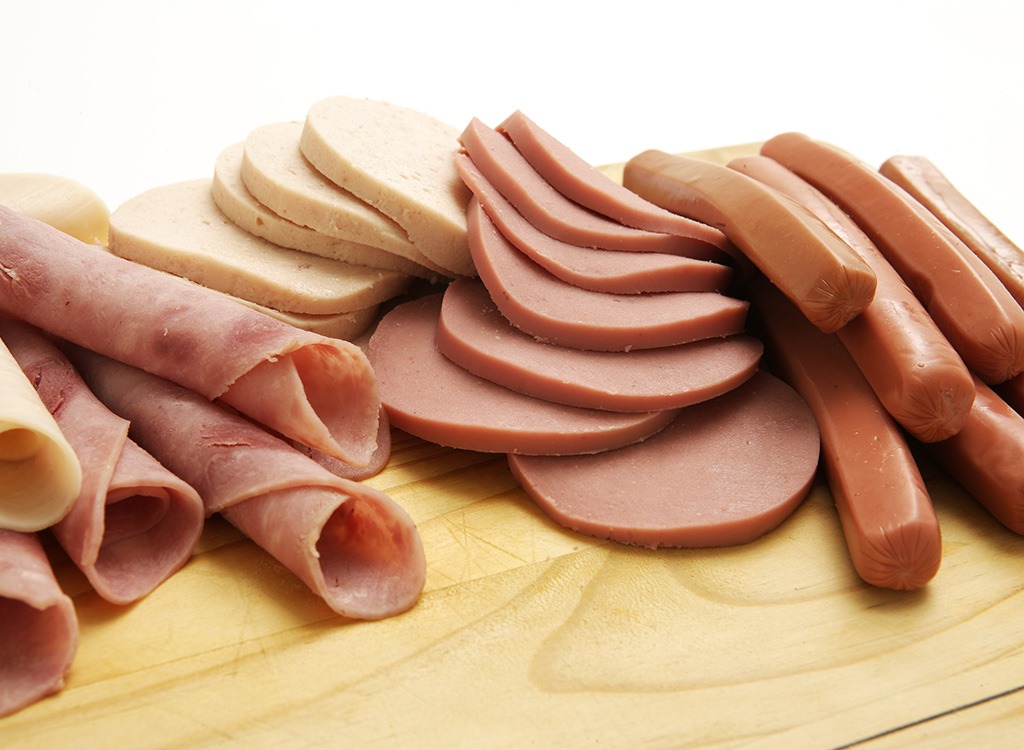 Meat may be considered the ultimate man food but if you gobble down the wrong kinds, your sperm may pay the price. A 2014 study published in the journal Epidemiology found an association between eating processed meats like salami and hot dogs and lower sperm count. And interestingly enough, the meat’s saturated fat content—a nutrient previous associated with poor sperm quality—wasn’t to blame. The study authors hypothesize that there’s something that happens during processing that’s detrimental to sperm quality—they’re just not quite sure yet what that is. 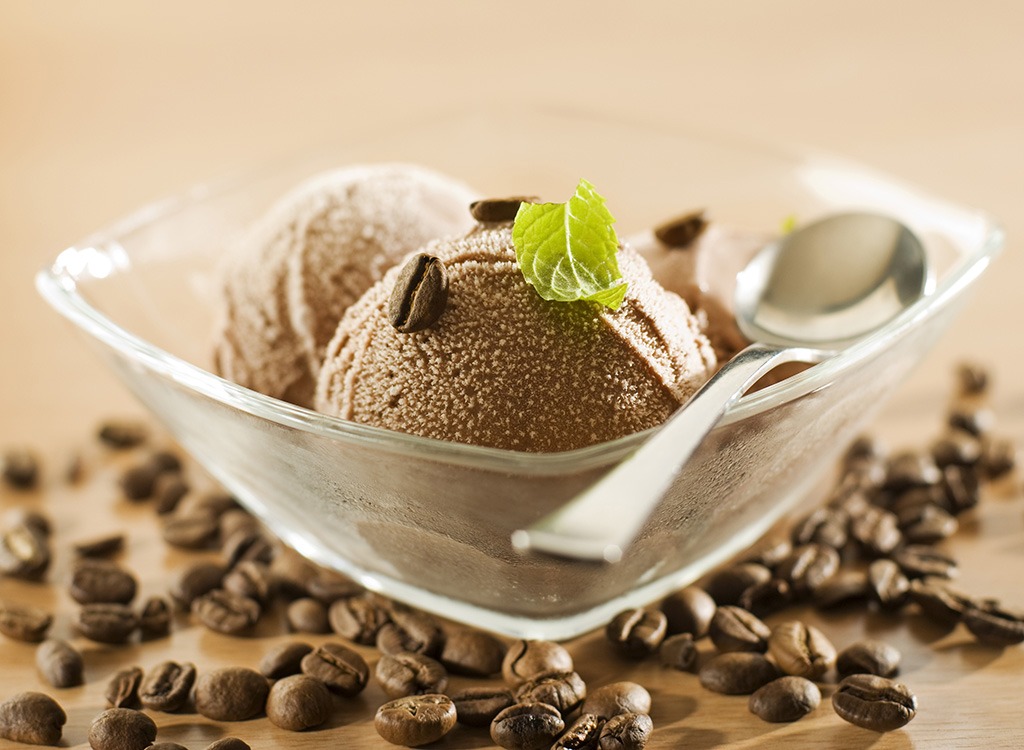 An after-dinner scoop of coffee ice cream—which has the caffeine equivalent to a half-shot of espresso—may have never messed with your sleep before, but once you’re in your 30s, caffeine can take more of a toll on the body. “As we age, our circadian rhythms change, as do our hormones, which can make us more sensitive to caffeine and affect our ability to sleep soundly,” says Smith. What’s wrong with getting a little less sleep? In a recent study of more than 500 participants, researchers found that losing a mere 30 minutes of shut-eye increased their risk of obesity by 17 percent! Yikes! Metabolism slows down as we age, so slacking on shut-eye will only add fuel to the waist-expanding fire. And speaking of metabolism, keep yours running in high gear with the help of these 55 Best-Ever Ways to Boost Your Metabolism. 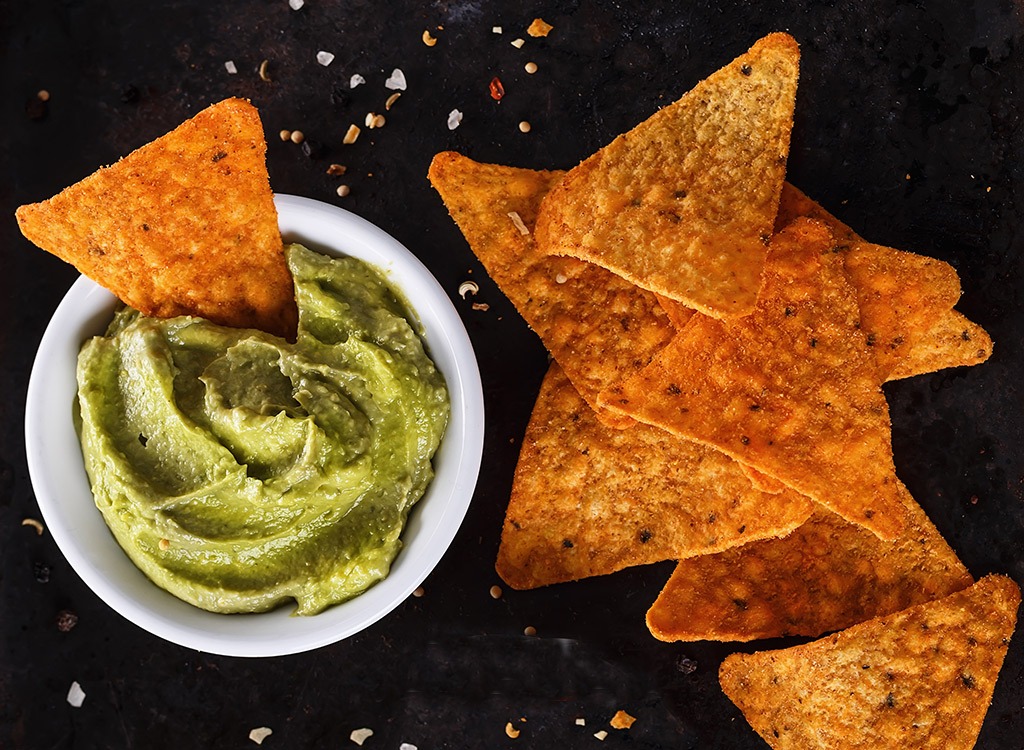 With each passing year, the body requires and burns fewer calories. This makes it all the more important to eat reasonable portions as you journey further into adulthood. Sounds easy enough, right? Sure. Until you pick up a bag of Doritos. Everyone knows that when you open a bag, you’re bound to polish it off—and it’s no surprise, really. The recipe for the popular chip was specially designed so that no single flavor overpowers another. When foods lack a dominant flavor, people are less apt to feel full and, in turn, consume more, say researchers. What’s more, one of the first ingredients on the food’s label is monosodium glutamate (MSG), an additive that’s been known to increase appetite and make foods taste more appetizing. With all of these factors working against you, it’s really no wonder you’re defenseless when Doritos come around. 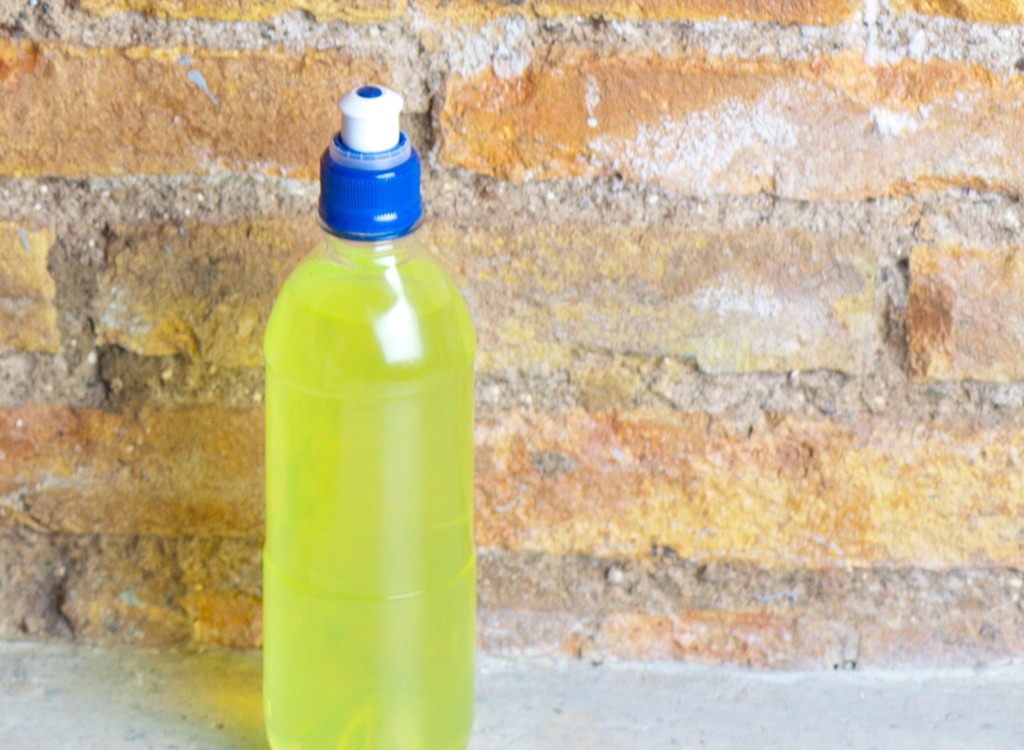 Whoever invented the Gatorade Dunk—the tradition in which winning sports teams dump coolers of the stuff on their coaches—was really on to something. One scan of the nutrition label and it’s clear: The sports drink is better off seeping into the sidelines than your stomach. Sure, it provides critical post-workout electrolytes, like sodium and potassium, but it also serves up a hearty helping of calories and sugar. And the fact is, you likely don’t need the extra calories and sugar found in the sports drinks—no matter how hardcore your Crossfit or barre class may be, says Smith. “As we age, our metabolism slows, we’re also less active and more stressed which can change the way that the body metabolizes calories and sugar.” The less sugar you have in your system, the better it is for your abs and overall health. And speaking of getting a flat stomach, check out these 42 Ways to Lose 5 Inches of Belly Fat. Coffee creamer and sunblock have more in common than you might think. They both contain titanium dioxide, an ultraviolet radiation blocker that doubles as a whitening agent. Besides lurking in many conventional creamers, it’s also found in seemingly ‘healthy’ bottles like So Delicious’ coconut milk-based varieties. The additive has been proven to cause liver and tissue damage in mice, and may also have health implications in humans, according to a recent review of the chemical. Coffee creamer is also typically packed with trans fats, often hiding under its lesser-known name: hydrogenated oil. Pretty much all of Coffee Mate’s products have this scary ingredient that has been shown to diminish memory in adults under 45 years old. If you’re working hard or don’t want to forget where you parked your car, this is one ingredient you should steer clear of. Need another reason to stay away? Moskovitz says trans fats can cause inflammation, which can exacerbate aches and pains, brought on as the result of a sports injury and aging.