Globally, child obesity rates are skyrocketing while young children spend the lion’s share of their time in school. The children are consuming a large portion of their daily calories while there and develop lifelong eating habits and food preferences.

Do the schools attended by children influence their weight?

“As a child development researcher interested in child education, health, and poverty, I recently had the unique opportunity to work with epidemiologist Tracie Barnett to examine this question.

Our resulting study, published in the International Journal of Obesity, found that schools with the unhealthiest food environments were more likely to be located in disadvantaged communities.

We also found children between the ages of 10 and 12 who attended schools with lower-quality food environments had higher amounts of central body fat (or ‘central adiposity’ in technical terms) after two years than children attending healthier schools.

Central body fat is fatty tissue that is stored around the waist and abdomen. It poses a greater risk to long-term health than fat stored elsewhere on the body.” Children experience a huge increase in dangerous central body fat if they spend at least two years in a school with unhealthy foods, according to a Concordia University researcher

“To understand how a school may influence a child’s weight, we analyzed information on 431 elementary school students attending 246 schools.

All schools were located in urban areas of the province of Québec and were followed as part of Québec Adipose and Lifestyle and Investigation in Youth (QUALITY) — a larger study investigating the evolution and course of childhood of obesity.

In this sample, we studied the proximity and quality of food that students can easily access at school.

1) those with unhealthy food environments inside the school;

2) those with unhealthy food environments inside and surrounding the school; and

3) those with healthy food environments inside and surrounding the schools.

We assessed the healthfulness of the food environment inside a school using interviews with the school principal, who answered questions about the food sold on the premises and the quality of the school menu.

We measured the food environment surrounding a school by the geographical density of fast-food restaurants and convenience stores within walking distance. 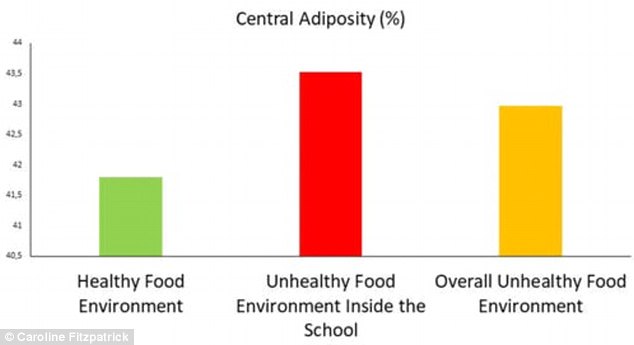 Percentage of central body fat according to school type attended

“A great number of countries — including Canada, the United States, and the U.K. — have put in place policies to ensure that high-quality foods are offered and sold in elementary and high schools.

Even though biological and psychological factors contribute to obesity in important ways, there’s been increasing interest in social and environmental causes. That’s because they can offer cost-effective and modifiable targets for interventions.

Indeed, the school food environment is a particularly attractive target for intervention since the vast majority of children spend so much of their time in.” The family context of fitness

“Our study is not without limitations. First, our measurement of the school food environment inside schools was solely based on interviews conducted with school principals.

It is possible their reports were affected by their ability to recall certain details. In addition, principals’ reports could have been biased by their desire to present their schools in a more positive light.

Our findings are also limited by the use of a correlational design. We cannot rule out the possibility that some characteristics of children’s family lives might have determined the type of school they attended and their level of fitness. To reduce that possibility, all of our analyses took into account parents’ education and income, two important determinants of socioeconomic status and health.

In order to assess whether our findings applied to a wider population of children, replications with lower-risk youth and ethnically diverse populations are needed.

Winning the battle against obesity

There is evidence carefully designed and implemented interventions aimed at improving the food environments in schools can improve the quality of children’s diets.

Our results suggest the food environments around schools should also become a target for intervention and social policy.

Finally, according to our analyses, schools in disadvantaged communities may have the most difficulty providing healthy foods to their students.

Future research could help identify some of the barriers that prevent schools from implementing successful healthy food policies in order to better support their efforts in the future.

Our best chances for winning the battle against obesity and cardiometabolic disease lie in our ability to implement preventive interventions as early as possible.

We recommend increasing efforts to create healthier food environments in elementary schools where children spend much of their time, consume a large portion of their daily calories and acquire the basis of lifelong eating habits and preferences.”